My Experience of the Women’s March

It started at the airport. Not the DC airport, the first airport, in Seattle. I was walking down the terminal to my gate for the redeye. I saw a woman with a pink hat sitting with her friends, so I stopped and said hello. I asked if they were going to the march. Of course they were. We all were. Why else would we be in that part of SeaTac at 9 pm on the night after the inauguration?

I was about to continue on my way when her friend opened her pack, pulled out a bag of pink hats, and offered me one. Strangers in Kirkland had been knitting like mad, and her plan was to give the hats to marchers who didn’t have one. Which one did I want?

I hesitated, because I actually didn’t want one at all. For starters, I wasn’t marching, and I told them that. I was worried it would be too much for me physically—at least six hours of standing, a route of unknown length, no guarantee I could leave if I wanted to. So instead I was going to a conference of leftist lawyers. Also, and I didn’t say this, but I’m not so much of a hat wearer, nor do I especially like pink or silly cat ears. I get the joke, sure, and I applaud it, but I didn’t want to actually wear the hat. And third, and I definitely didn’t say this, but I didn’t want a thing called “pussy” on my head. It’s a vulgar word. Sure, the hat was just a reference to cats, but it really wasn’t. The joke was that it was also a vulgar sexual reference, and I just didn’t want it on my head. I don’t even call cats that word. Plus I didn’t want to participate in reducing women to solely sexual creatures, and sexual kitten-like creatures at that, even in the context of political empowerment. And I was quietly bothered that this whole event was leaving out men, with its pink and pussy and women and all.

The women in the airport urged me to take a hat. I didn’t want to be rude. I chose light pink, saying since I was only half marching I would take only half pink. There was a large tag tied to it, from the knitter, asking the recipient to post a photo of them wearing it to a certain website. I didn’t want to disappoint the knitter, so I figured at some point I would slip the hat on quickly, take the selfie, and then stuff it back into my bag. For now, the presence of the tag gave me an excuse to not put it on immediately, so I put it in my bag and said thank you.

I continued on down the terminal. As I turned the corner to the gate, I saw pink hats everywhere. Groups of young women, older women by themselves, some men, all wearing the hats. I hadn’t expected it, but it made sense. This was Seattle after all. Plenty of people from here would be drawn to the protest, and this was the only flight to DC from Seattle that night, so of course the flight was all protesters. Everyone was in a good mood. I was seated near the back of the plane, and dozens of those pink hats were poking up from the seat backs in front of me. 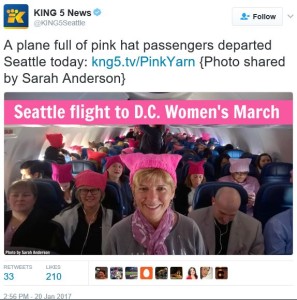 I was thinking they didn’t really look so silly, in context, and I thought about putting mine on, in solidarity. But it was in the overhead compartment and too much trouble to get out.

In the morning, all those pink hats got off the plane in DC and walked toward baggage claim. I had decided by then to put mine on. What kind of activist can I be if I’m embarrassed by a silly hat? I stopped at a Starbucks for a bite to eat and to find something to cut the tag off with. I slipped the hat on and then realized two things. The planeload of pink hats was now gone, so I was the only one around. And there was a group of red hats near me, waiting for a flight to South Carolina. Uh oh. I walked toward baggage claim, passing red hats going in the opposite direction and planning what I would do if anyone started yelling at me. I decided I could handle the yelling and, now that I had the hat on, I wasn’t taking it off. This is America, dammit.

I took a shuttle in from Dulles to downtown. The whole shuttle was pink hats and signs and backpacks. As we pulled away from the curb, I saw nothing but pink hats waiting for shuttles, taxis, Ubers, even a limo. We were going to make three stops: first in Virginia, where a woman was connecting with her friends, then to Third and Independence on the Mall, where the rest of the van was going, and finally to my hotel further north. As we drove north after the first stop and neared the Virginia border, I started to see a few people with pink hats here and there, walking north with quite a ways to go. 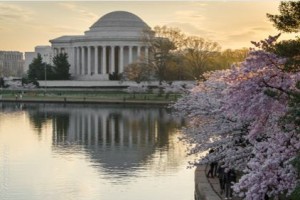 The Jefferson Memorial came into sight, which has always been my favorite. This small gem off to the side of the big monuments, surrounded by all that water, dedicated not to a soldier but to a writer. The morning light made it especially beautiful: warm and dignified. I suddenly realized how much I had been thinking of America as vulgarity and insanity and garish colors and wild protests, but right in front of me was the America that is the Jefferson Memorial, beautiful and solid and enduring.

The trickle of pink hats was becoming a steady stream. The radio was announcing Metro alerts and unplanned street closures. By the time I could see the Washington Monument, the traffic had become intense, and the pink hats were everywhere. The shuttle driver said he’d never seen this before and couldn’t figure out how to get us to the Mall. He finally dropped the others a few blocks away. I seriously thought about getting off the van myself. History was happening, and I was right there. But I had my suitcase. Maybe I could leave it somewhere. Maybe the shuttle driver would take it to my hotel for me. I could tip him. I had no cash. I was completely unprepared for the march. No sign, no Sharpie, wrong shoes. I still didn’t know how long the route was. But, but, but…! No, I said to myself, this is not for you. You’ll go to your hotel and sleep right through history and go to the conference later. That’s your role, not this.

So I stayed on the shuttle and went north, away from the action. We went somewhat east of the Capitol (also beautiful and iconic, but startlingly so, given what happens inside). The pink hats were still everywhere, and not rivers like pretty mountain streams but rivers like the Columbia. Huge and unstoppable. I saw one woman stop traffic with a look. There were all ages, genders, skin colors. Old people in wheelchairs, not as old people in their 60’s regalia, groups of women my age, families with children. The stream let up a bit as we got further north, but there was still an onslaught coming from at least two miles away. All in pink hats, all carrying signs, all the signs and all the hats different. “Here comes everybody” indeed.

I did sleep right through history and went to the conference later. By the time I got there, the march was finishing and the day was shifting. I heard rumors that the march had met its expected attendance of 200,000 and had probably hit 300,000. It was definitely larger than the Inauguration the day before. Seattle, which had been expecting 30,000 to 50,000, was over 100,000. And this was happening everywhere. The conference participants started showing up from the march. They all had the hats (me too!). I had thought they would be exhausted, hurting, bitchy, and relieved to finally make it to somewhere with seats and booze and cell phone chargers. But they were full of joy and, of all things, inner peace. I was definitely not expecting that. 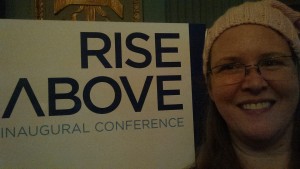 The conference that night had a series of short talks on a variety of topics, all excellent and inspiring. We were encouraged to focus on state and local issues and to run for office, which is what the GOP has been doing for years. The talks were filmed, so I hope they make it to YouTube. The news of the day’s events was starting to come in in earnest, with stunning numbers of participants reported from all over the world. The DC march hit at least 500,000. Seattle might have been 175,000 and at one point filled the entire route. London—London!—had 100,000. And so on. 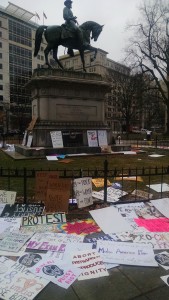 That was Day 1. Next came Day 2, when the euphoria faded and the work set in. But the mood at the conference was still indescribable: hopeful, happy, respectful, interested, vibrant, committed. I just don’t have the words. People took their pink hats off, put their suits on, and went to breakout sessions. The sessions ran the gamut: immigration, the economy, fake news, hate crimes, reproductive rights, conflicts of interest, etc, etc. The caliber of panelists was top-notch, as was the caliber of audience members. These were not the top tier movers and shakers, but the second and third tier, where the actual work gets done. One of the groups putting on the conference was Lawyers for Good Government, which is lawyers from around the country. The other group was RISE When We Fall, which seems to be mostly federal employees and the former staff of various former elected officials.

When the conference ended, it was hard to leave, but I had to get to the airport. And there was one last piece of business to attend to. I needed a picture of the hat for the woman who knit it. I went over to the White House, put my hat back on, and took this picture: 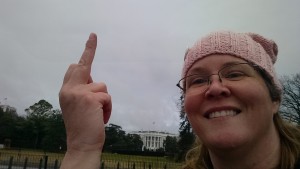 Today is Day 3. Today my pink hat is with other things that spark too much joy to tidy away, but serve no practical purpose. Today the new president might stop obsessing over the size of his…crowd and start using his genuine power to destroy the things I care about. This weekend didn’t change that. But today I know the size of the movement I am a part of. Today I am ready to put on either my pink hat or my suit to realize the vision of Jefferson and all the rest. Today pussy grabs back.